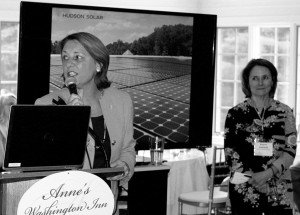 On July 8th the Solarize Saratoga Lunch Party attracted over 100 people interested in renewable energy held at Anne’s Washington Inn on South Broadway in Saratoga Springs. Aztech Geothermal Staff volunteered to help with the installer selection and planning of the Solarize Saratoga initiative.  Our president, John Ciovacco assisted with the financial modeling of various lease and purchase options for PV solar systems, while Max Ciovacco volunteered to staff sign up tables at the local farmers market.  Both of them took some great photos of the launch party which featured Apex Solar and Hudson Solar as the selected installers.  Co-Chair of Solarize, Rayna Caldwell was the master of ceremonies with welcoming remarks from City of Saratoga Mayor Joanne Yepsen.  We were glad to see a number of our customers stop by to expand their renewable horizons!