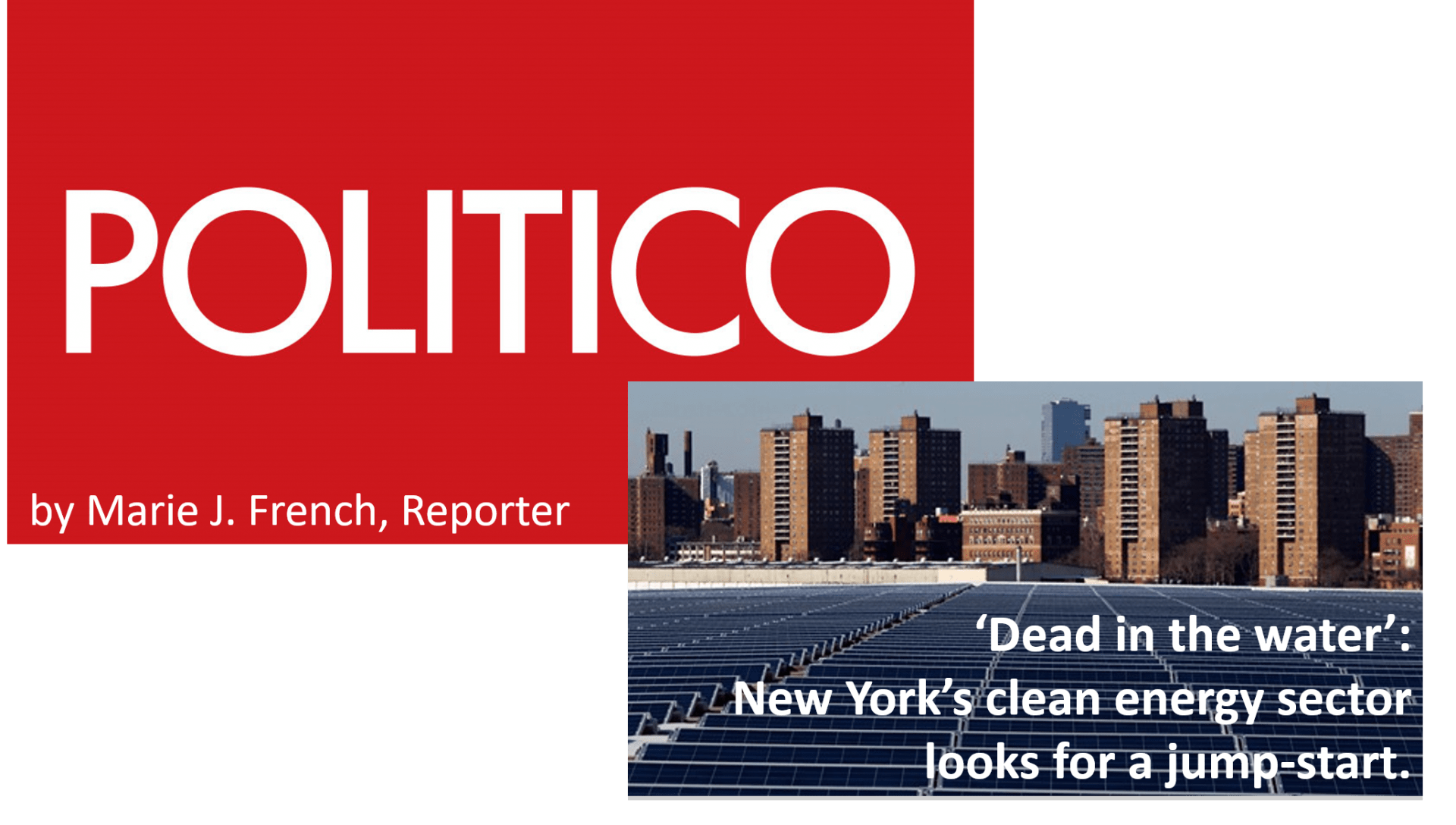 A rooftop is covered with solar panels at the Brooklyn Navy Yard. | Mark Lennihan/AP Photo

Aztech’s President, John Ciovacco, is quoted by Marie French in a recent POLITICO article published on 4/19/2020, titled ‘Dead in the water’: New York’s clean energy sector looks for a jump-start. For the full article please read it here.

‘Dead in the water’: New York’s clean energy sector looks for a jump-start

ALBANY — Work on almost all of the state’s clean energy projects has ground to a halt and the industry, still struggling for ascendancy, is grappling with furloughs and layoffs as the coronavirus tears through New York’s economy.

New York’s clean energy industry is further along than in many other states, but is still heavily dependent on state subsidies that may not be enough if the economic calamity many are predicting comes to pass. A halt on all nonessential construction has included projects by energy efficiency companies, renewable developers, heat pump installers and electric vehicle charging businesses — and they’re looking for answers on when restrictions will be eased on in-person work.

Advocates hope the widespread disruption from the coronavirus pandemic will not have long-term repercussions for achieving the state’s renewable and emissions reduction goals.

“There’s no sector of the economy that has not been impacted by this virus,” NYSERDA president and CEO Alicia Barton told POLITICO. “We are extremely eager to do everything in our power to make sure that is a temporary impact rather than a long-term impact.”

NYSERDA has convened webinars with various clean energy sectors to discuss what programmatic tweaks and other changes can be made in the immediate and longer term. Ideas include offering training for workers to safely resume construction at on-premise activities when it is allowed, offering flexibility on contract deadlines and accelerating payments to support cash flow for businesses.

“New York has been leading in climate and clean energy strategies,” Barton said. “We’ll also be leading the nation in how to build back.”

It won’t be easy.

Anne Reynolds with the Alliance for Clean Energy said energy efficiency companies have laid off between 40 and 50 percent of their workforce. The industry wants to see some earlier payments, funding of remote energy audits and other support, laid out in a letter to the Public Service Commission in late March.

“These utility-led programs could drive significant job and economic growth statewide as we step out of our current PAUSE,” she wrote, referring to the name Gov. Andrew Cuomo has given the shutdown. “We are at risk of losing a skilled and trained workforce as work is stalled, and job losses and furloughs accelerate.”

Barton said policy changes will be rolled out as decisions are made and, while there’s a desire to move as expeditiously as possible and some work can be performed on a “desktop basis,” the authority is wary of any activity that could compromise public health.

“We’re very much in a dynamic situation and we don’t want to prematurely advance programmatic changes,” she said.

The state lost an estimated 5,000 clean energy jobs in March, with more losses expected as the full impact of Gov. Andrew Cuomo’s order shutting down much of the economy beginning March 22 is felt.

It appeared at first that companies installing energy efficient heating and cooling systems or heat pumps would be exempt from Gov. Andrew Cuomo’s executive order halting all non-essential construction because Empire State Development said a single person on site could keep working. But then NYSERDA stepped in and ordered a stop on all on-site work for projects receiving state subsidies — including community and residential solar, utility-scale renewables, heat pumps getting rebates and energy efficiency work financed by the authority.

“Clean heating and cooling is on pause with everything else. We’re dead in the water,” he said. He’s told customers, “If there’s no immediate threat to health, safety or significant property damage, then we’re not coming.”

Likewise, Lime Energy, which has operations in New York and several other states, has furloughed almost 70 of its 100 in-state employees. The company implements commercial energy efficiency programs for almost every major utility in the state, installing efficient lighting, HVAC, digital thermostats and refrigeration equipment.

“It’s a pretty rough thing when you build a business that makes its living going up and down Main Street knocking on small businesses’ doors, talking to them about energy efficiency,” said Lime Energy CEO Adam Procell. “This has really conspired to be a perfect storm for Lime.”

Procell said the company is doing electronic proposals for customers and doing energy audits over FaceTime.

Ciovacco said he’s worried the shutdown jeopardizes the state’s progress toward its emission reduction goals, especially given the already uphill path for electrifying heating. Without a mandate banning new or replacement fuel heating systems, heat pumps remain more costly on an up-front basis. Ciavacco said his pipeline of leads for new jobs is down by about 80 percent.

“People are home so some people are thinking ahead,” he said. “Mostly people are worried that their net worth has dropped by 30 percent and they’re not entirely sure they’ll be hired back on the job.”

A focus on training

The clean energy industry serving homeowners is of particular concern for NYSERDA, Barton said. That’s partly because of potential financing hurdles with the economic devastation wrought by the pandemic.

NYSERDA plans to send out a survey to clean energy companies to assess how their projects have been affected and what training companies may want for employees who can’t work on site, Ciovacco said.

“If we make any progress at all during this it’s that we come out of the other side smarter,” he said of potential support for training.

Barton, who said the furloughs were “heartbreaking,” suggested programs could include safe workplace practices as the risk of Covid-19 lingers, or even payments to support other required online courses.

NYSERDA has also extended deadlines for contracted projects through its distributed solar program, NY-Sun, it’s assessing schedules for requests for proposals and is considering waiving certain on-site certification requirements for projects to provide some cash flow for companies.

Cuomo has indicated a desire to begin reopening the economy in a gradual way. He unveiled a matrix-style approach Wednesday where more essential, lower risk activities could begin to resume sooner than others. He also said the private sector would have to contribute by thinking about how to adjust to the “new normal” and minimize risks of spreading the coronavirus.

Some clean energy executives hope they’ll be among the first to return to work — with safety protocols and personal protective equipment, or PPE, in place.

“A lot of our work takes place outside,” said Dave Schieren of EmPower Solar, Long Island. “We do now have access to PPE. We’re working on ideas and protocols for the different types of work that we do.”

Schieren said the industry is working with NYSERDA to get work started again as soon as it is deemed safe.

His company does installation for residential, commercial and community solar projects and he’s furloughed 52 out of 86 full-time employees — mostly the installation workers since that work is on hold. Some projects at schools have continued.

The people remaining on the payroll are tackling more challenging projects that will help improve productivity when things restart, Schieren said.

Procell suggested that while schools are shuttered, it would be a good time for energy efficient retrofits to be done. He said the industry was not making that argument early on because of the need for a lockdown to reduce the spread of the virus.

“There’s the ability of people to be working in the field with protective equipment, and most electricians work alone, and the schools are empty,” he said. “We do think though that a period of a complete lockdown of the energy efficiency field for weeks is doable. For months? That’s not doable.”

Procell said he’s submitted risk mitigation plans to the major utilities, as well as forward-looking consideration of products small businesses might be more interested in, such as automated doors and ionization or UV air filter systems.

The longer the shutdown continues, the more jeopardy the clean energy industry will be in. The achievement of the state’s sweeping climate goals might also be at risk with an extended halt to work.

“Meeting the renewable energy targets were already a very aggressive set of goals and I think there’s no doubt about it — we are injured right now. This is an injury that is not mortal but it could turn mortal,” Schieren said. “We do require federal support right now, that’s clear. It’s hard to expect the state would be able to shoulder that burden.”

Schieren and Ciovacco applied for the Paycheck Protection Program loans for small businesses that ran out of money on Thursday. NYSERDA has been advising companies about available federal support.

That support could provide some cash flow through mid-June, although it’s unclear what employees might be able to do during a continued shutdown beyond remote training.

The increased federal unemployment benefits have also been important to clean energy executives. Ciovacco said some furloughed staff may be pulling in more than they were working full time and Schieren said the enhanced federal benefit gave him some “comfort” in making the decision to furlough installers.

That includes money collected to pay for energy efficiency, heat pumps, electric vehicle chargers and other clean energy programs. The groups say they don’t want to roll back progress on the state’s goals, but see having that money flow back to ratepayers while all work is on hold as one way to ease the financial strain manufacturers, hospitals, colleges and businesses are under.

Barton declined to weigh in on the pending petition but said energy efficiency might be a good investment for businesses going forward to cut their costs. She also noted there are efforts to get the next federal stimulus to include funding for energy efficiency for small businesses and low-income households.

Barton said she’s optimistic clean energy will be able to bounce back. Some technologies may become even more attractive.

The pandemic has disproportionately impacted low-income and minority communities, with significant overlap with environmental justice communities that have high rates of respiratory issues from pollution.

“Cleaner solutions are going to be attractive to people as they increase their focus on public health… Clean energy can be a benefit to respiratory health,” Barton said. “All of that makes me optimistic that this is a temporary setback rather than a long-term setback.”